We've Been Building Pipelines Wrong. Here's How to Fix Them!

We’ve been building code pipelines wrong for years. Here’s how to fix them…

When reading this post, take the terminology as generically as possible. Treat the technologies / products mentioned as exemplars only.

For example, “Artifact” in this post refers to any deployable unit. Read that as a container image, a zip file or a single JSON file if you wish.

The Problem with “with”

If someone asked you to describe your pipeline, I bet you would want to describe something like this:

However, I bet what you’d actually describe is something like this:

As mentioned previously, the tools above are only examples, replace with the tools you use.

As soon as you mention the tooling you use to achieve those steps, you have already introduced several problems:

The consequences of the above are stark:

How about decoupling the pipeline logic (the what) from the tooling (the how). We could do this in the following way: 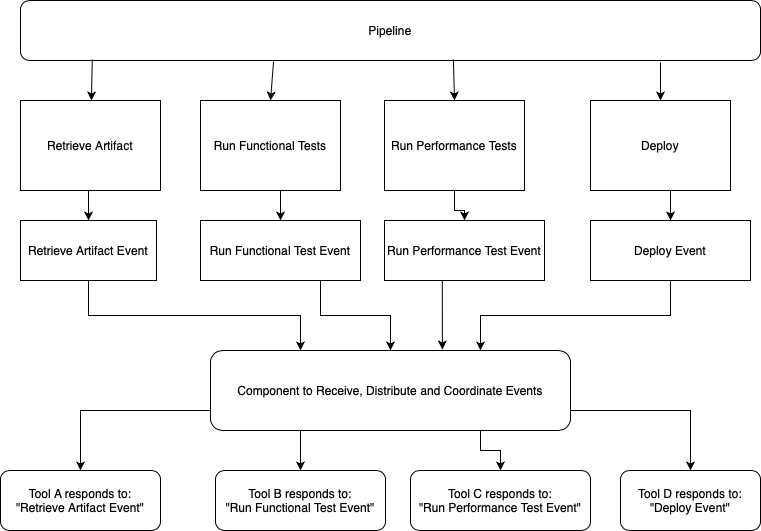 Take another common usecase of a pipeline. At some point you’ll want to send an alert outbound to a third party tool to inform someone of a status. It might look like this: 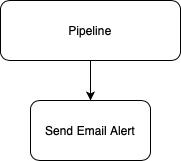 Again, you will have built specific integrations into that step to tightly couple your email servers and settings with the pipeline.

What happens if you want to replace email with a JIRA ticket or a Slack message or a problem notification into a monitoring tool? That’s right - rip and replace.

What happens if you want to send alerts to two places? Two integrations, two sets of APIs with which to integrate. Two sets of potential bugs. All code managed and updated by you. 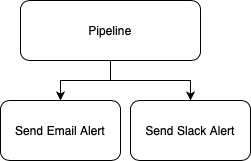 How about replacing this logic with a “send alert” sequence of tasks? Your pipeline sends that event and whichever tools are configured to listen for that event get to work. 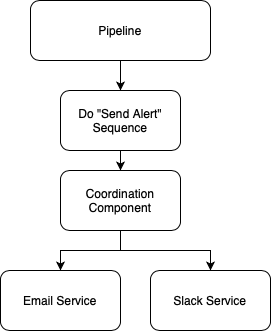 No longer want email alerts? Fine. Just uninstall the email service (or tell it to stop listening for “send alert” events) from the coordination component and your emails stop. 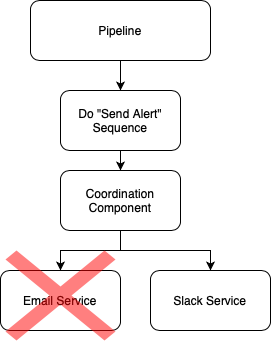 Zero changes to your pipeline and most likely, someone else has already written the “slack service” for you - so zero code upkeep or API knowledge required!

Concerns About This New Flow

At this point you probably think two things:

My concerns here would be:

Both of these concerns are valid, but both can be answered in the negative:

One More Usecase: Evaluating an SLO

Imagine the pipeline wishes to evaluate an SLO. There is actually a “sub” workflow involved here:

It would be really nice if our tool could encapsulate and understand that sub-sequence so our pipeline only has to ask for an SLO evaluation and the tooling does the rest automatically.

Good news, it does!

See above - Keptn is not just an event bus. It is much more and exactly what depends on the usecase that you bring to Keptn or your role within an organisation.

This post is focused on your first steps of migrating away from an existing pipeline, piece by piece, to Keptn. However you could use Keptn to define your complete end-to-end delivery pipeline.

Here is an example of a working Keptn pipeline definition. It has 3 stages: dev, hardening and production.

The dev stage contains two tasks: deployment and release (remember that the tooling which actually does these tasks is defined elsewhere). hardening is only triggered when a the delivery finished in dev message is broadcast. Similar is true for production stage but it listens for the delivery sequence in hardening is finished message.

If you’re struggling under the weight of multiple complex, duplicated or legacy pipelines. Give Keptn a look.

It can do a lot more and is basically a reference SRE template for continuous delivery and automated rollbacks - but more on that in future posts.

If you want to know more about Keptn, reach out to me on LinkedIn and we can chat.

Let me know by giving a thumbs-up (no login / account required).

Thanks. Your vote has been recorded.